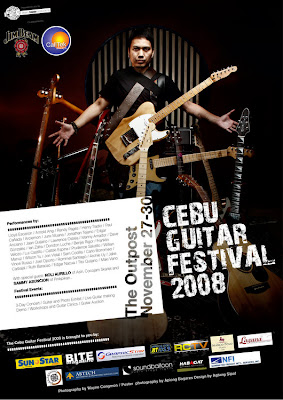 At last, after eleven years, I and my classmate and childhood friend, songwriter Jude Thaddeus Gitamondoc, had the chance to meet and catch up with each other's lives.

It was a meeting long overdue, considering that we both have been moving around the same city for around a decade now, although he has been staying here longer than I am. He transferred to Cebu City right before and after an undesirable event changed his life. Since then I never saw him. My last memory of him was when we played whole afternoon with another childhood friend, Joey. Jude just arrived from the city then and Joey and I were just ecstatic to meet and just be with our playmate and friend who was already a city boy then. But anyway, enough for the reminiscing.

Our chosen venue for our mini-reunion, The Outpost, at Nivel Hills in Lahug, Cebu City. It was the kick-off night of the Cebu Guitar Festival 2008, a gathering of homegrown, Manila-based and expatriate musicians to celebrate their love for music. This festival, which will be held on the nights of November 27 t0 29 at The Outpost, is still a baby at two years old, but shows a lot of promise just like the musicians whose talents it showcases. That night, again, music never failed to give me that indescribable high. I particularly enjoyed the performance of Edgar Nacua, which totally brought the house down that I felt I had to keep my jaw from dropping. It was acoustic and jazz night and it was hardcore at that. I knew I was in the territory of musicians and/or artists and it was a great company that I truly enjoyed, though I have met and seen them all for the first time - even Jude (Thaddy/Thaddy Boy for us way back then) who I met that night for the first time, after eleven years.

During and between performances, we talked about our classmates, how life has been since we last saw each other, how both of us have been doing in our respective careers, how the music industry is struggling (I learned a lot from him that night about how piracy affects them artists and the story behind gold/platinum records), and he even thought about organizing a class reunion in Baguio City. It was really great meeting a good friend from the old days. We talked and raised our voices louder just to hear each other (when the music was pleasantly loud - I mean that), laughed at how we were when we were still kids, and sighed how "adult" we have become now (somehow- LOL!), and bobbed our heads away to the rhythm of the music that echoed all over that strip in Lahug. Saying that it was a great night and I had fun was an understatement.

Time flew fast (as usual) and I had to head home early. As I rode the cab, I could still hear the muffled music tempting me to stay. But I had to go. Anyway, I know that this intoxicating high will take time to wane and when it does, maybe it would be just in time for the next festival, or maybe the next reunion with another or the same friend. 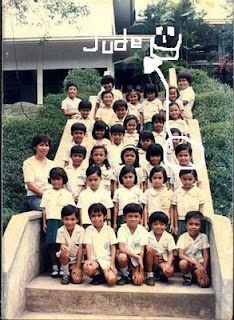 That's Jude when we were still in Grade 1. Now guess who's that girl standing beside him.


Now click play and listen and see what that little boy has become now. Yes, he wrote and composed this song. And more.