Last week, the first three members of the top twelve finalists of the eighth season of American Idol were revealed. The program has new mechanics for this year. The Top 36 Idol wannabes were divided into three groups of twelve, then only three from each group will be part of the top 12. The remaining three will be picked from the wildcards elimination. Pretty slim chances though, I thought.

This is just one of the revisions the program has to offer, including that of the addition to the panel of judges, Kara DioGardi, a 38 year-old singer songwriter, composer, and record producer, who I think deserves to be given the designation of an American Idol Judge.

She wrote and produced songs for a lot of famous singers like Celine Dion, Gwen Stefani, Jonas Brothers, Backstreet Boys, Carrie Underwood, Kelly Clarkson, and Christina Aguilera, just to name a few. And in case you're interested, she also co-wrote a song with David Cook and she wrote one of the songs in David Archuleta's album. Her achievements speak a lot for her - that she has been a big part of American Idol in a different way, helping the Idols on their climb to the top. This time, she emerges out from the curtains and is given the task of screening raw talents, and you can be sure she has a queer eye for that.

On a lighter vein, it also interests me, who will be in for a cat fight, would it be Paula and Kara? Or Kara and Simon. These judges have pretty much their own stand on how they look at the performance of the contestants and they really stand up to it. I have also read articles comparing Kara and Paula. Some dig the new girl and I like her too. She has a star quality of her own. She's beautiful and elegant without sacrificing authority.

Now that the Top 36 are slowly trimmed down to The Final 12, here's what I personally think of the first batch of finalists. 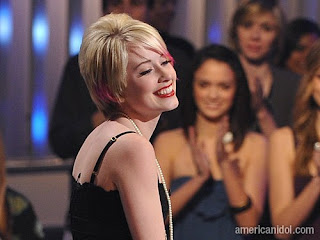 One of my personal favorites. As early as this time, I am rooting for her to be the next American Idol and I strongly defy Randy's preemptive remarks that a male is going to get this year's title. Alexis Grace is a headturner, and more importantly, she's got an extraordinary voice that could give justice to Aretha Franklin's songs. I definitely agree with Simon when he told Alexis Grace that she is someone to watch out for this season. 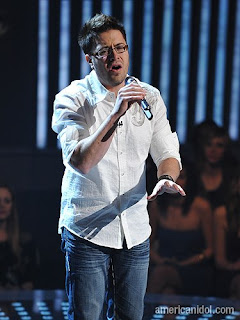 A widower with a charming bedroom voice. He makes me believe that Mariah Carey songs seem to have a punch as a choice of song for Idol specially when sang by a male. I was in another room while he sang Mariah Carey's Hero and I did not find anything extraordinary with his rendition but I changed my mind when he sang the song again when he got picked as finalist. He was somehow able to inject his emotions to the song and sang quite a lot of kulot-kulot too. I am afraid though that he might just be getting sympathy votes. His wife Sophia died last year. 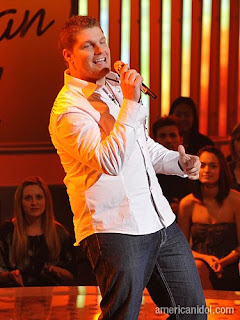 An oil rigger, Michael once said that he just wants to have a job which calls him to do the thing he loves, singing that is, while earning good money for his family. For me, he could just be a recipient of sympathy votes. Now that he is on the Top 12, they might as well include that welder guy. Let's wait and see. The judges believed that he could perform better than when he sang Gavin DeGraw's I Don't Want To Be. I agree with them and although his being married might make girl fans look the other direction, let's give this guy a chance and see what else he has to show. Aside from bending his other knee and almost jumping in place while singing his piece.