Please pardon the silence which overpowered this blog for a long time.

I crossed time zones in the past month and went down with colds, fever, and a little cough, along with jet lag. I caught the cold just before I left the Philippines. The cough and fever followed through like they had to.

I could not imagine how I managed to survive that wicked recipe of whatever. I got a frog on my throat then and my voice was really reduced to a croak. When my worried mother would send me text messages asking how my voice was, I would joke, "Mura'g ulitawong baka." Now help me translate that to English please. :-)

Fever was on and off, intermittent in medical jargon, and my body clock was in a total mess. Top that with the worst case of colds I ever had in my whole life! I would rather not go into the details of how bad that case of colds was but I surely was glad that I readied a bunch of hankies on my hand carry or else, I do not know what I would have done then. I took a handful of decongestants but I suspected they caused a really ugly rebound. Oh well.

When my plane landed on Detroit, Michigan, I had the first view of what snow looks like. I suspected there was a snow storm going on when we arrived at the United States. Everything was snowy white - so that's how it looks like! My seat mate even exclaimed that she thought we were still above the clouds and we haven't landed yet! The flight attendant advised the passengers to take caution while walking on the plane side because a considerable amount of snow managed to find their way there and that could make the plane side slippery.

I admit I was excited to see snow for the first time. In fact, by the time of this writing, my excitement has not dwindled a bit yet, even after I played with snow for a while in New York. I realized what people say is true, you become a child again when you see snow for the first time. You want to play with it, just scatter it around, make a snow ball out of it, throw it at your playmates, make your own snowman and see how it melts after.

Unfortunately, the snow at Detroit just flirted with me. I saw the snow on the plane side but I had to practice a little decency and stop myself from touching it. When I tried to look at it closely, the snow reminded me of Ajinomoto crystals which my grandmother was fond of using when she cooks. My first encounter with snow was also my first encounter with veeeeery cold weather, the one that makes your mouth emit some kind of smoke when you speak or breathe through it. Bbbbrrrr...!

The excitement somehow took a backseat for a while when I lined up at the immigration area. The immigration officer was suspicious - to put it mildly - when I mentioned that my purpose of coming to their country was to appear for an interview. I understand their concern because, given the financial crisis that is striking everybody everywhere, the United States included, they would not want their country men to be deprived of jobs by foreigners like me. The immigration officers, there were two of them, grilled me for around fifteen minutes. I know that was spending a long time standing in front of that immigration desk because the long row that followed me was reduced to nothing at all when I looked back. Those who were next in line probably transferred to others lines which had faster turnovers. Somehow I managed to survive that grilling and I had to proceed to the baggage claim carousel to get my luggage and recheck those at the counter again.

I spent another 20 minutes at least in waiting for my luggage to be on the carousel and another 10 minutes in lining up for another security check. After I went through all those, I barely had 20 minutes to look for my gate. I was almost in a trance of panic, afraid that my plane would leave without me in it. I was walking fast, running again, walking again, and running again on the walkalators (Kudos to whoever thought of those running floors :-) Thank God I found my gate. The attendant must have seen me run really fast towards the gate because she commented, "That was fast!" I just replied with a smile while I handed to her my boarding pass, panting and catching for my breath at the same time.

I got on my seat on my plane to Memphis, Tennessee. The snow continued to flirt with me when I glanced at the window. I allowed it to flirt with me then, knowing that eventually I will have a chance to answer to that flirtation, in a few days time. My plane did not take off immediately though, because the crew at the airport had to clean its outside with a reddish solution to wipe off the snow. There goes the flirtatious snow. Then I remembered what my seatmate on the plane said, yes the one that thought we haven't landed yet. She knew it was my first time to see snow. She's Pinoy. She told me, "Congratulations. But you'll get sick of it (snow) after a while." Then we laughed.

Maybe that time will come. But for now I'll just take my time and enjoy this another kind of high that I am in now. 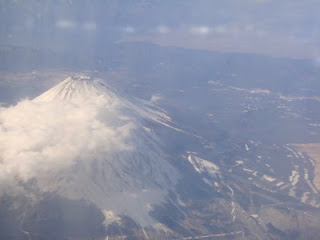 SNOW CLAD. Mt. Fuji in Japan, as viewed on the plane window. It is the highest mountain in Japan, and one of its "Three Holy Mountains," with Mount Tate and Mount Haku. Actually an active volcano that erupted last 1707-1708, its exceptionally symmetrical cone is a well-known symbol of Japan. Reminds us pretty much of our very own Mt. Mayon in Albay. :-)