Conquering two ziplines and a cave

April 19, 2009. After days of waiting for this Sunday, and after a total of four hours of travelling both by sea (from Cebu City to Tagbilaran City, Bohol) and then by land (Tagbilaran City to Danao, Bohol), I, together with my friends, finally got to this town nestled on the northern part of this beautiful island. We came to treat ourselves to an adventure which has recently become a major hit on this side of the country. If I could only coin a terminology which is much better and more encompassing than the word adventure, that would be the best word to use for this experience.
Chocolate Madness. I have toured Bohol last year with my mother and my sister but never did I get so close as this to one (actually two) of the world famous Chocolate Hills. That is why, I pleaded that we stop for a minute so I could have a picture with the hills on the background. I didn't care if the hills remind us of a part of the female anatomy. What's important for me then was I got this close. 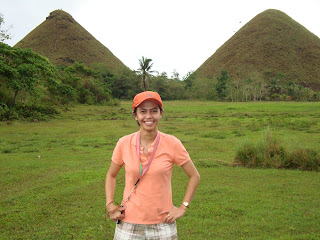 Long and winding road. The road to Danao made me think of a milder version of the zigzag road to Baguio City. Our road trip was occasionally marred by heavy downpours and there was always the threat of dark clouds ahead, ready to spill all the rain they've got. However, we all remained unfazed. Isn't that the essence of going into an adventure?

I thought I was that brave until I saw this. 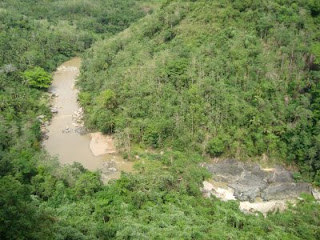 The view from above.

To walk away or not to walk away. This is the view 150 meters from where I was standing. 150 meters is the distance from the river bed to the very zipline we came here for. My feet felt like they had a life of their own and they wanted to move to the reverse direction. And all the while I thought I was brave until I saw this kid, probably a six-year-old, ziplining, as if she was playing house. (Observe that on the background, someone exclaims, "Hadloka uy!" [That's scary!])

Bombs away! That's me on the left and that's my fellow doc, Lynor, beside me. It's a good thing they allow guests to zipline by two's. It works for scared first-timers like me. And oh I thought, I was brave. Anyway, that was a few milliseconds ago. The crew shouted, "Bombs away!" then pushed us to the wildest ride we ever had. Our companions got a good laugh when they saw me raise my left arm in mid-air, while I was shouting my heart out.

This is the first of the two ziplines in Danao and it measures 450 meters, the longest in the country today. The zipline in Davao City is a poor second at around 340 meters. In their activity guide, they call the zipline as the suislide. I cringe just looking at first syllable of the word and so I prefer to call it the zipline. The first zipline lasts for approximately 45 seconds but the video below only lasts for around 25 seconds because the rest of the line is far from where it is recorded, that you can neither see the end of the line, nor hear the "zip" of the of the metal wheels as they slide through the cable. 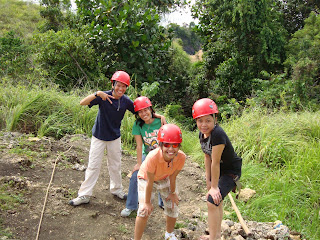 After the first zipline

Another helping. Thankfully, Lynor and I reached the other end alive. We were laughing - amused and nervous all at the same time. We did it! We were then ready to go spelunking. We're through with this zipline stuff or so we thought until the crew said we would walk a few meters uphill for the second zipline. Our jaws dropped then after a few seconds we laughed, this time louder. Still we were nervous, amused, but this time, we were more excited than the first time.

Going solo. Lynor and I agreed that we go through the second zipline individually. This second line is shorter but still has the same distance from the river bed (150 meters) to the cable. 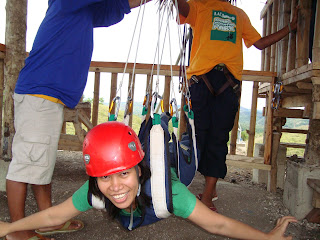 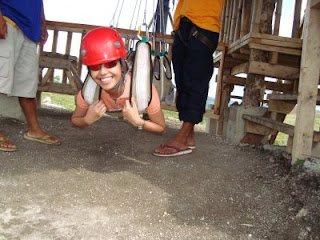 Come zipline with me. The Finale. This is exactly what you'll see while ziplining in Danao, Bohol.

Warning: Though the crew has a sphygmomanometer at hand in case the guests want their blood pressures taken before the slide, still this ride is not for the weak at heart. Once you have begun the ride, do NOT ever attempt to close your eyes or else you'll miss a lot. Watch the video that follows, from start to end, then tell me, do you want to give this a try? Would you even bother? Enjoy! Bombs away!