I used to see the likes of them when I reach the ports of Cebu City from my port of origin in Mindanao. Just when the sun starts to peep into the horizon, and the ship enters the city harbor, these Badjaos race their bangkas towards the passenger ship. The sense of urgency to get near the ship is so evident it almost resembles rush hours in city streets. They transform the great blue into a visible magnetic field and they are like paper clips or iron clippings which are drawn helplessly to its central source which is the passenger ship.

Now I see the likes of them each time I reach the Port of Tagbilaran City. More than twenty years had passed since I first saw their forefathers, and yet their tricks are still the same - they entice the passengers to throw their coins into the water and they then show off their diving skills as they plunge down before the coins reach the ocean floor. There is no age limit, young or old ones can do the diving as long as the "diver" knows how to hold his breath and keep his eyes open underwater so he can grab the coin before other divers do. They come in families, and mostly the mothers stay on the bangka breastfeeding the youngest child in the family (yes, breastfeeding the baby in front of an audience) while coaching the little ones who are already able to dive for a living.

Over the years though, some of them have modified their tricks - or better yet, got tired of performing them. Sometimes they just hold out a sack with its two sides sewn or tied roughly to two sticks which they then hold out to catch the coins being thrown at them. In that manner, they never have to dive into the water at all. The coin, which stands for a promise of another meal, is caught in mid-air just before it touches the water. 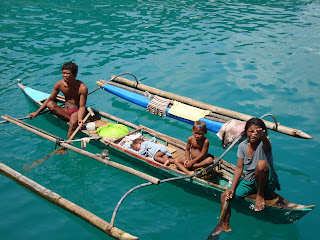 THE BADJAO BUNCH. They come in groups. Nobody is (and should be) left at home and so the young one had to take her morning nap directly under the scorching heat of the sun.

Each time I disembark from the vessel, I hear the ooh's and aah's of my fellow passengers, both foreign and local tourists, as they see these Badjaos flock at the pier and ask them in their dialect to throw their coins to the water. From their expressions it is hard to tell whether they express repugnance or delight. 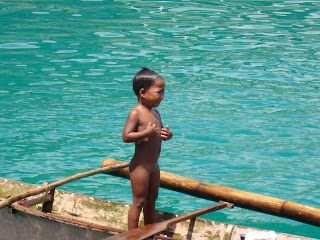 INVISIBLE KID. As members of her family dive for their next meal, this little girl's presence is suddenly dropped to the bottom of the priority list and she is left forgotten and alone in her little boat. 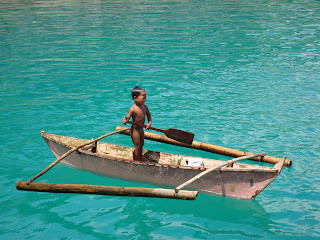 PLAN B. No, I don't mean the morning-after pill. After her screams fail to catch her family's attention, the little girl grabs the paddle and tries to advance the boat to where her siblings are.


I walk away asking myself, how long will it be before these Badjaos rise from the pits to end this throw-your-coins-and-we'll dive-for-it game? I walk away, asking myself, will this crazy game ever end?
at May 10, 2009