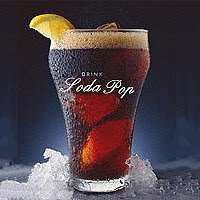 Image from evitamins.com
Maybe it's about time we soda drinkers turn cold turkey.

A Singapore Chinese Health Study recently revealed that regular consumption of sugar-laden soft drinks can boost an individual's risk of developing pancreatic cancer. The study was a cohort prospective type which enrolled 60,524 participants. A prospective cohort study, basically means that the study population or the cohort, which would comprise persons who share a certain common characteristic or experience within a defined period, is followed up for over a period of time to determine the occurence and/or frequency of the studied disease among them. Prospective or longitudinal cohort studies are often used to establish causal associations between exposure and disease. Since cohort studies require a great deal of time to be devoted in studying the subjects, it is one of the most financially-challenging studies to conduct. The participants of the study were followed for a whooping 14 years.

Soft drink consumed weekly
So, how many times do you drink soft drinks in a week? According to the study, those who consume two or more soft drinks weekly had an 87% increased risk of pancreatic cancer compared to those who did not. Soft drink portions were defined as one glass, and one glass being defined as equal to 237 mL.

No association with fruit juice noted
The high glycemic load of soft drinks and fruit juices have led to the hypothesis that they may cause pancreatic cancer. The surge in insulin levels that these beverages cause is believed to trigger pancreatic cell growth. However no association was established between fruit juice intake and risk of pancreatic cancer. The failure of the study to find a link between the two is attributed to three things mainly, lack of subjects who drink fruit juice, the difference in sugar component of fruit juice itself compared to the sugar component of soft drinks (fruit juice has lower sugar content), and lastly, the more healthy lifestyle of fruit juice drinkers compared to the lifestyle of soda drinkers.

Lifestyle plays a role
Among other things, those who consume 2 or more drinks are more likely to smoke, had higher alcohol consumption, lower physical activity, and consumed more total carbohydrates, fats, added sugar, and red meat, compared to those who do not consume soft drinks. However, there was no statistically-significant evidence that cigarette smoking and fruit juice intake may increase the risk of pancreatic cancer.

But don't release the confetti yet, because in an age-adjusted analysis, smoking was noted to be a risk factor. The authors found that current smokers had a 49% increased risk for pancreatic cancer compared with never smokers.

Further studies needed
The authors of the study take the results as an evidence to the ties between pancreatic cancer and sugar-sweetened beverages but also admits that the need for further studies still exists.

My bad romance with soft drinks
The results of this study serves as an eye opener for me to start cutting off on my soft drink intake. Since I started earning for myself (which was not too long ago really, since I have spent a big chunk of my life studying and burying myself in books), soft drinks have been very accessible.

It was worlds different from my younger days when my parents would only decide to buy a liter of Coca-Cola (there were no 1.5L or 2L serving portions then) when our viand was quite special than what we usually have, or when relatives come over to visit, or during pay days, apart from special occasions such as birthdays, anniversaries, and despidida parties. I remember how the sight of a smokin' cold liter of Coca-Cola just brought in by the househelp, would brighten my face and my sister's too. One whole liter of that would be shared by all five or six of us in the house.

Another funny thing (and reality) is that we only get to drink soda, especially the Royal Tru-Orange flavor, when we were sick. I don't really know if that is the case with you when you were kids, or is it? That is how that running joke started - when someone serves or drinks Royal Tru-Orange, we usually ask in jest, "Gihilantan ka?" ("Are you having fever?"), because that is the only time we get to drink Royal Tru-Orange, and sometimes, we get Sprite with crackers like Sky Flakes, a combination believed to have anti-pyretic (fever-lysing) properties - with emphasis on believed.

Fast-forward to now, the 1.5L of Coca-Cola is almost always on my grocery list. Today, I rarely have a soda-free week. During duties at the hospital, the canteen is just a mere one-minute walk away, and you can then drown yourself up with all the soft drink you can gulp. These days, the access has become so easy to the point that my 2L of Coca-Cola is just standing beside my plate. Supply has even quadrupled considering that a 1.5L or a 2L is shared by only one or two persons in the house.

But I would still like to believe that I haven't stepped yet into the boundary that defines addiction with soft drinks. Believe me, I am a better case compared to my colleague who only has soda flowing in his veins, you'd think he'd develop heaves and rashes when he drinks a beverage other than soda. In the three years we've spent working together, I haven't seen him drink water. Once in a while he drinks chocolate milk, but once in a while means twice or three times a month at most. He doesn't get bothered when it's time to load a new water container into the dispenser, and he admits to really feeling weak, as if he has to drag himself around, when he doesn't drink Coke. In comparison to his case, I believe my situation presents a better scenario with a promising prognosis.
My mother, the mother that she is, has started to notice my toxic love affair with soft drinks and has somehow expressed her concern. It was even her who made me realize that I barely even drink a glass of water in a day. Usually, I take coffee in the morning, have soft drink during meals, and nothing else. No pure, crystalline, water taken in. That is why, now, I confess to you that this study result really makes me cringe. I hope it's not too late to start working on increasing my water consumption and lessening my soft drink intake. Actually, I'm willing to work on that because one of my goals this year is to have a healthy body, a healthy lifestyle. I was willing to work on that goal even before I read the study, but now I am even more willing to do that. Truly, the strategy most often used by doctors such as that of scaring patients a bit to make them more compliant with their medications or with lifestyle modifications, work. I feel that strategy working on me now. Talking about falling into one's own trap.

Anyway, let's see if I get through this self-imposed challenge. And I hope my mother notices, with all the mother that she is. And when she does, I hope she will candidly remark, "Hey, you seem to be drinking more water these days." And in my mind, a triumphant musical score will play.