Last March, it was so nice of my aunt to tour her sister - that's my mom - and me at The Walt Disney World in Orlando, Florida.

This is one of my most memorable experiences while I was in the United States.


There are four theme parks at The Walt Disney World in Florida, namely The EPCOT Center, The MGM Studios, The Animal Kingdom, and The Magic Kingdom.

One whole day, most of the time, is not enough to enjoy all the activities and to explore all the attractions of a certain Disney Theme park. Probaby, it's more like you really don't recover from a certain state of excitement when you are inside a Walt Disney Theme Park.  Of course, aside from the very fact that it's Walt Disney!

As a child, I have always been mesmerized by Disney stuff, I have heard of the existence of Disney Theme Parks and wished I could be there, and never did I expect it to become a reality.

The parks usually open at 9am and close at 5pm and that is the actual time you spend inside the park to enjoy the rides, the shows, and the sights.  As much as possible, you want to try everything in the park from the food to the rides and the shows.  You want to explore its sights as far as where your feet will lead you, and as far as where your feet will yell "Stop!" because they are aching like hell.

I realized that being inside a Walt Disney Theme Parks is like experiencing snow for the first time.  I felt like a child again.  I let go of being an adult and enjoyed.  Even my mom did.  Who would ever think that a poor child, the youngest in a brood of eight, who probably never knew about the existence of anything that is related to Walt Disney,  and who used to sell bundles of kangkong when she was in her elementary years, would come to America not to work but to simply enjoy the American life.  Imagine what exhilaration that must be for my beloved mother.

No one is ever too old or too young to enjoy The Walt Disney World.

At the end of the day, we, tourists aging from 2 to 95 years old, exited the gates tired and exhausted but brimming with satisfaction.  It was truly an experience of a lifetime.

Anyway, we visited the EPCOT Center first, and then the Animal Kingdom.  We spent one whole day in each theme park.  (I would like to think that we reserved the other two theme parks for a future return trip to the Sunshine State. LOL!)

EPCOT stands for Experimental Prototype Community of Tomorrow.  I have shared some of my photos at EPCOT in my previous posts.  (Click here to see some of the pictures.)  This time I am sharing to you some of my pictures in The Animal Kingdom.  For animal lovers, and yes, maybe the not-so-animal-lovers, I hope you will enjoy this first serving of Animal Kingdom pictures of storks and flamingoes at the Walt Disney World in Orlando, Florida. 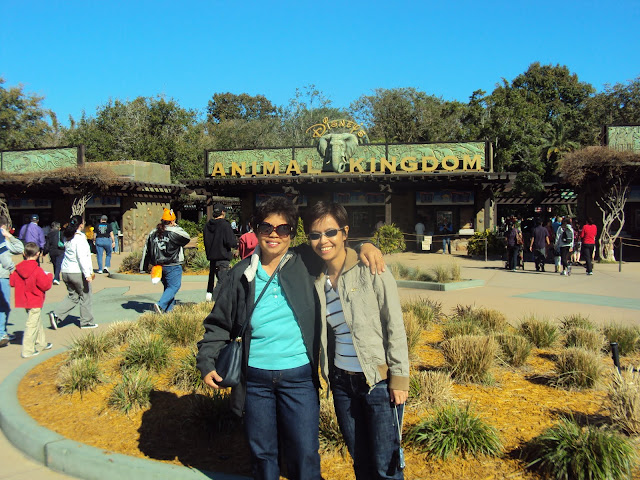 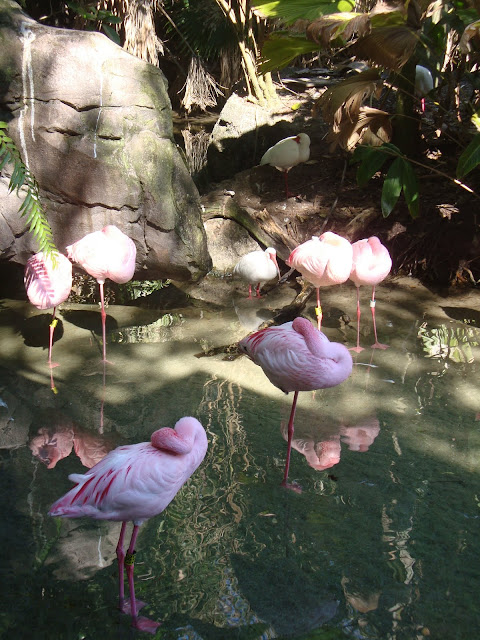 NOW TELL ME, HOW DO YOU EXACTLY DO THAT? These shy flamingoes could surely give us some lessons on how to curl our necks that way.  An American White Ibis looks on as the pink flamingoes show off the contortionists that they are. 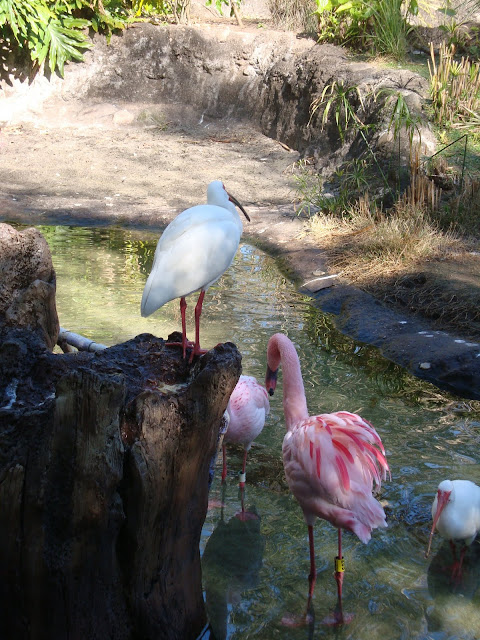 SEE WHAT TWO B'S (BACTERIA AND BETA CAROTENE) CAN DO. Adult flamingoes will have plumage that range from light pink to bright red due to aqueous bacteria and beta carotene obtained from their food supply.  Here are two pink flamingoes sharing the water and the view with two American White Ibises. 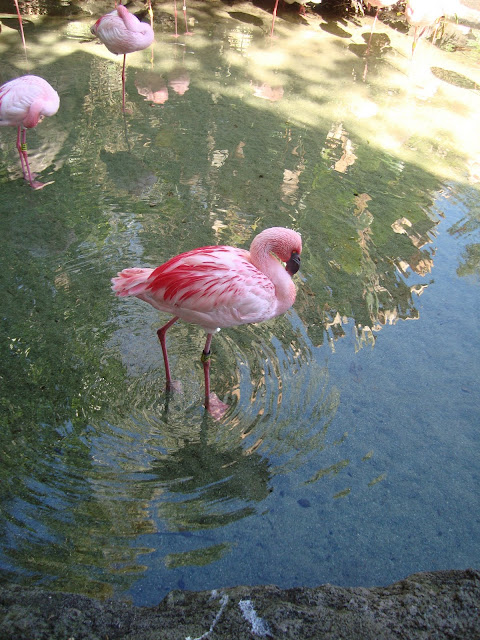 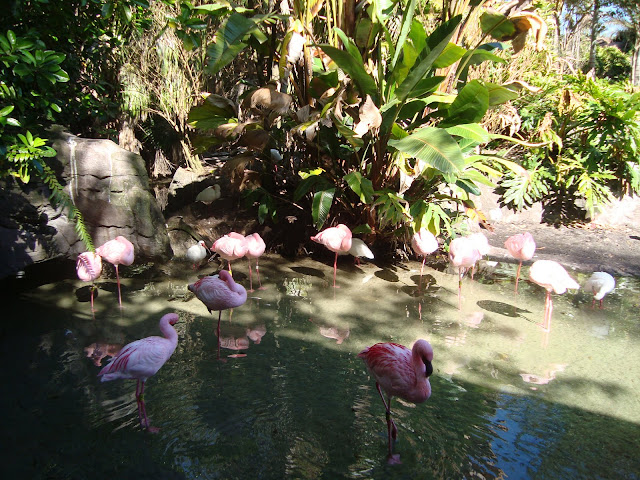 CONTEST.  Flamingos often stand on one leg, the other tucked beneath the body. The reason for this behavior is not fully understood. Some suggest that the flamingo, like some other animals, has the ability to have half of its body go into a state of sleep, and when one side is rested, the flamingo will swap legs and then let the other half sleep,[citation needed] but this has not been proven. Recent research has indicated that standing on one leg may allow the birds to conserve more body heat, given that they spend a significant amount of time wading in cold water.  (From Wikipedia) 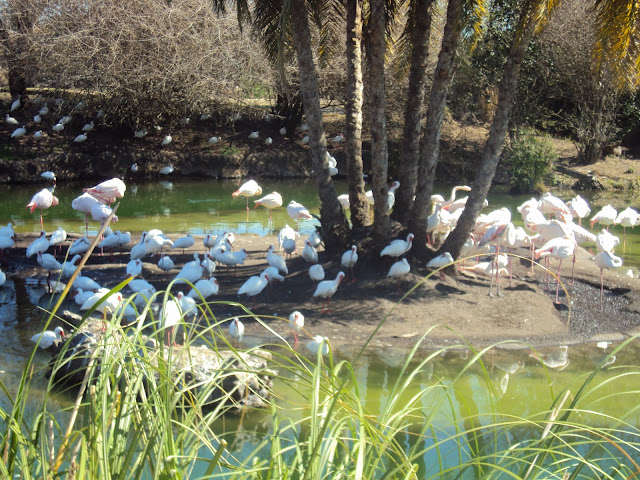 FLAMINGOES EVERYHWERE.  A white or pale flamingo, however, is usually unhealthy or malnourished. Captive flamingoes (like these ones) are a notable exception; many turn a pale pink as they are not fed carotene at levels comparable to the wild. This is changing as more zoos begin to add prawns and other supplements to the diets of their flamingos. (From Wikipedia) 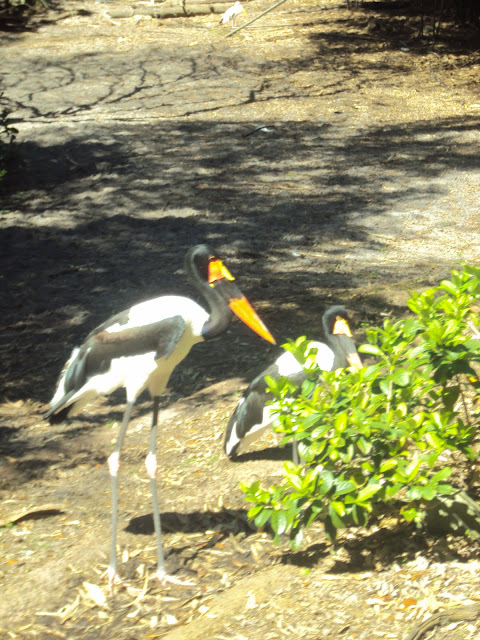 Stork the bird, not the candy. 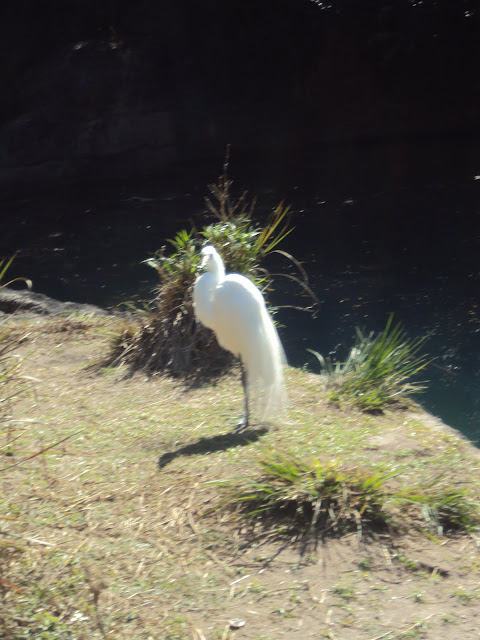 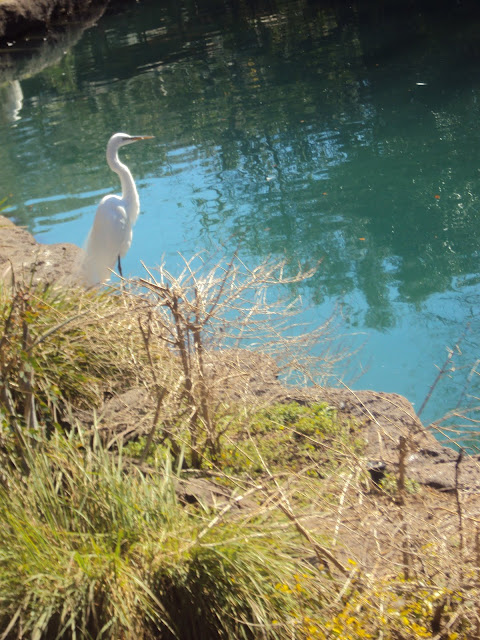