I wonder what you or my colleagues would answer when asked, "As a medical practitioner, what do you consider as your bestfriend?"  As a professional, or as an expert in your field, what do you consider as your bestfriend?
I figure some, probably lawyers, might answer their books or ebooks for that matter.  Probably a gastroenterologist might answer, the scope.  A neurologist might answer, the reflex hammer or a penlight, perhaps.  But for me, I pick the ever dependable stethoscope.  Coffee would come as a close second.
The stethoscope would probably be, for me, what they call in vernacular as "sumpay sa tinae." (Continuous with the intestines.) That vernacular idiom is quoted when one is seen almost always with someone or something, like inseparable bestfriends.  Someone or something that you could not live without, like your smartphone or your favorite gadget.
For me, as a doctor, it takes the form of a stethoscope. 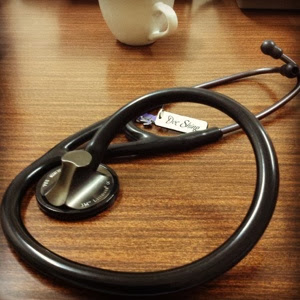 If you happen to see me around the hospital, you would never fail to see this baby hooked around my shoulders.  It is almost for me, a body part, or okey, a part of my clothing, that I feel barenaked without it.  Honestly, I do not feel that I am a doctor at all if I don't carry it around with me in the hospital.
The one above is my third stethoscope in my whole medical career.  Bought my first when I was in second year medical school.  It got lost during internship when I rode in a taxi on my way to another hospital.  Had to order one from a friend who works in Berovan who was kind enough to sell it to me through an affordable installment package for medical students.  The second one was with me for around eight years.  Before my second stethoscope retired, I could not tell whether it was my hearing acuity or it was the stethoscope which was failing.  You see, the stethoscope and I, we were both aging.
Then comes this third one.  I should probably name it "Thirdy."  Thirdy is a gift from my aunt who is based in the United States.  I could not be more thankful and excited about having this dream stethoscope.  In a way, it inspires me more everyday to be the best in what I am destined to do.
at March 05, 2014